Philips Hue LightStrips are vibrant, easy on the eyes, and hard on the wallet. You’ll pay $65 for six feet (two meters) of LEDs, not including a hub. But why spend that much when you can buy alternatives for far less?

LED strip lights brighten a room or add some much-needed color. They’re easy to install and use, and create excellent ambient lighting. But you usually control standard LED strips with an Infrared (IR) remote. Unfortunately, those IR codes often overlap with TV IR remotes, which leads to conflict. You might turn up the volume on your TV and notice the lights turn red. When you turn down the volume, your lights might flash random colors. Smart LEDs bypass IR altogether to avoid this frustrating issue.

Philips Hue offers some of the brightest, most colorful, and most expensive smart LED strips out there. But if you’re willing to settle for something that’s nearly as bright and colorful, we’ve found some alternatives that will leave more money in your wallet.

How to Choose an LED Strip

When you buy LED strips, you have to consider a few things:

If you don’t plan to put your LEDs on a flat, horizontal surface, you might need an adhesive. Every set of inexpensive LEDs I’ve ever used has had terrible adhesive. Within one day, any LEDs I’d mounted from a ceiling, wall, or another vertical surface inevitably fell. Even cleaning the surface first didn’t make a difference.

Most double-sided tape is thick, expensive, and overkill. That extra thickness causes uneven bumps in the LED strip. Carpet tape, though, is extremely thin and strong. You can cut it into thinner pieces, apply it to the bottom of the LED strip, and then remove the second paper side before you mount the lights. This should hold your LED strips to nearly any vertical surface.

If you want to brighten a dim room with a white light that won’t hurt your eyes—and add a splash of color—iLinktek has a great option. You connect this 16-foot (five-meter) RGBWW strip via Wi-Fi. It’s also compatible with the Smart Life app, which means you can set it up with Amazon Alexa or Google Assistant for voice control.

The one downside is the company doesn’t recommend you connect more than two strips to a single power adapter.

By comparison, though, you’d spend around $136 for 16 feet of Philips Hue strips, not counting the additional Hub. At this writing, the iLinktek strip is $30. 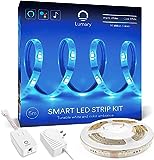 This Wi-Fi compatible strip sports RGBWW LEDs to give you a white light that isn't harsh on the eyes. At 16 feet, the strip should stretch across most rooms.

If you know you always want color, or the harsher white light doesn’t bother you, you get all the same Wi-Fi benefits you’d get with the RGBWW strip, including the 16-foot length. 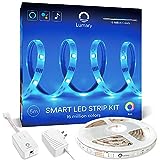 A good set of Wi-Fi lights that offer RGB LEDs, this iLinktek set connects to the Smart Life app, Google Assistant, and Alexa.