Welcome to my review of the Lumary L-DS100 Dimmer Smart Light Switch with Wifi and Voice Control, Compatible with Alexa, Google Assistant! I've had two of these switches installed for about three months now and I'd like to tell you all about the pros and cons of this specific switch. From its sweet looks, easy touch controls and it's one-of-a-kind lighting, let's dive right in!

If you've never been to my website before, then you should know I'm a bit of a smart home geek (I have several smart home products — probably close to 30 installed at any given time) and I love to keep up on the latest trends of Google and Alexa smart home products! I was really impressed with this particular switch and wanted to everyone my opinion on it! If you ever want to get in touch with me, please don't hesitate to contact me.

My headlines for this product are:

Very cool: Touch controls, very nice nightlight effect, easy to use, setup was a breeze.
Not cool: Branding on switch (albeit small and inconspicuous, so it's not too bad), touch controls aren't perfect, clear-ish plastic face makes it hard to match.
Overall: Fantastic light if you can get it on sale. Looks amazing in just about any room.

Check out how the Lumary L-DS100 Dimmer Smart Light Switch compares to its competitors! 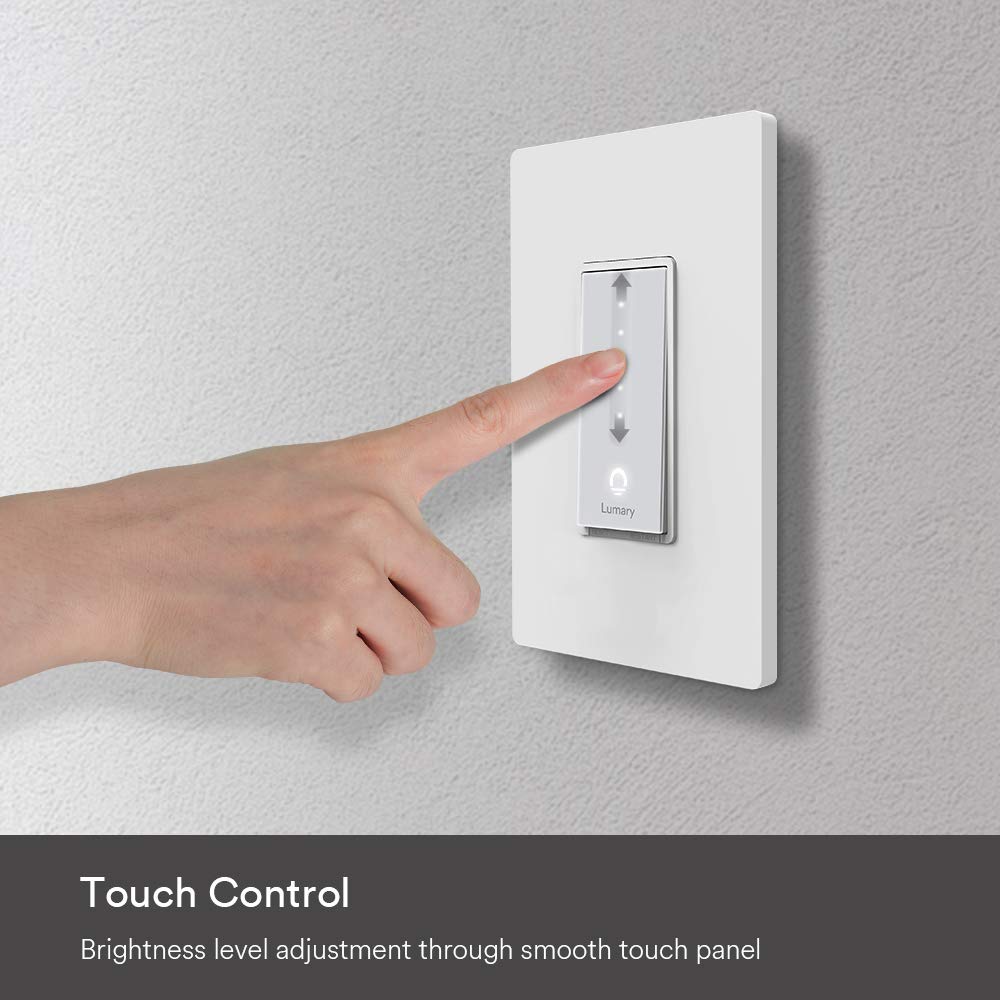 I'm Listening... Tell Me More About the Lights!

Calm down slugger, we're getting to the good stuff now! The lights truly are something that I haven't seen on any other smart light switch and it was originally what drew me to this specific product. I saw some of the review pictures on Amazon and I thought to myself, "This light looks alright!" and then as I started to read more about the Lumary L-DS100 smart dimmer switch (not to be confused with the L-S100, which is a smart switch only without the dimmer), I realized it had a TOUCH feature to it. Much like we use touch controls on our phones, this smart dimmer switch had touch controls to raise and lower the brightness of the attached lights — I was sold! So after I hooked it up, flipped the breaker back on and turned this switch on, I truly fell in love with it.

The lights on the smart dimmer switch itself look absolutely amazing. The logo (which is always on) is always illuminated, but the logo is a circle with a horizontal line through it, so unless you've seen the brand before, it just looks like a normal, slightly more stylish nightlight that helps you find the smart switch in the dark. But when the light is on, it displays dots vertically up the smart switch so you can see the brightness percentage you're on and this is truly where the Lumary L-DS100 shines. With an easy swipe of the finger up or down the switch brightens the dots and eventually lights up the next one (or turns it off if you're swiping down!). It's a very cool, a gives a futuristic look and feel to the Lumary L-DS100. I was completely impressed by the lights on the smart dimmer itself.

Yes! Although they can be clunky at times, the Lumary L-DS100 Smart Touch Dimmer WiFi Light Switch can brighten or darken your lights by simply swiping up or down on the smart switch itself. See the image to the right to see exactly how you're supposed to dim your lights — it's super easy. The only complaint I have regarding this feature is that it can be a little clunky at times. Sometimes when I want to dim, I'll accidentally hit too high on the switch which causes the lights to "jump" to max brightness for a split second and then dim from there. If you're not expecting the sudden burst of light or if someone is sleeping in that room, it can be quite disturbing. My advice would be to try to place your finger on the dot that it lit up nearest to the top and then swipe from there.

You're still going to get random inputs and misreads sometimes, but that's just the nature of the beast with touch controls on anything. I'm sure you've seen "ghost" touches on your phone where it seems like "something" is pressing buttons on your phone, but you're not touching anything, right? Fortunately, there aren't any ghost touches I've run into yet, but as long as your pretty clean and don't slap your touch controls with a greasy slice of pizza, you should be fine. Obviously, things like water and grease can cause touch controls to malfunction and register false inputs.

Can I Install the Lumary L-DS100 Smart Touch WiFi Dimmer Switch by Myself?

It's easy for anyone to install!

I'm not an electrician by any means, but I understand colors, what they represent, and how to not kill myself touching wires. Heck, you don't really even need to know what the colors do, but as long as you know what to do with them, you're in good shape. As with any electrical install, please do your own research as it can be extremely dangerous and you CAN kill yourself if you're not careful! I assume NO liability if you hurt yourself, fry your product, catch your house on fire, or accidentally set off a nuclear bomb (pretty impossible, but hey, it's 2020!). Please review the pictures above and make sure you have a VERY FIRM UNDERSTANDING of how to do BASIC wiring before proceeding. Again, at the end of the day, this stuff is VERY basic, but it's also VERY dangerous. In a typical install, all you need to do is remove the old switch (ALWAYS pay attention to where the wires are going in the wall) and install the new switch. Obviously, MAKE SURE YOUR POWER IS OFF BEFORE DOING SO. Your typical "dumb" switch may only have two (or even three) wires running to it and you may be looking at your product going "Wth? I have four wires!" but it's super simple! Again, in a typical install, your "live" (POWER) wire goes to the bottom of your "dumb" switch and then you hook the "live" (again, POWER) from your light to the TOP of the dumb switch. When you flick the switch UP/ON, it connects both black/live/power wires and sends power to your light. Makes sense, right? With your SMART switch, your LIVE/POWER still connects to the black wire on your switch, but instead of connecting your LIGHT's power source to the top of the switch, you simply connect it to the RED wire on the smart switch. In this instance, power comes IN on the black wire and goes OUT on the red wire. Since ALL smart switches in 2020 require a neutral wire (white wire), make sure all of them on bindled and capped off and your ground wires (GREEN on the back of smart switches and BARE COPPER in your walls most likely), do the same with those. Again, I STRONGLY URGE you to YouTube some basics on "How to Install a Smart Switch" or even a basic switch to get a visual idea of how it works. It's easy, but can be unsure if you're not positive. Again, as always, TURN OFF YOUR BREAKER(S) FIRST! Also, one last note, these switches can be a bit "deep" and typically require larger gang boxes to be installed in the wall. If you already have gang boxes that are 2" deep, you should be okay. If not, you may need to replace your gang boxes with some deeper ones, such as the Carlon B114R-UPC Lamson Home Products Number-1G Old Work Box. 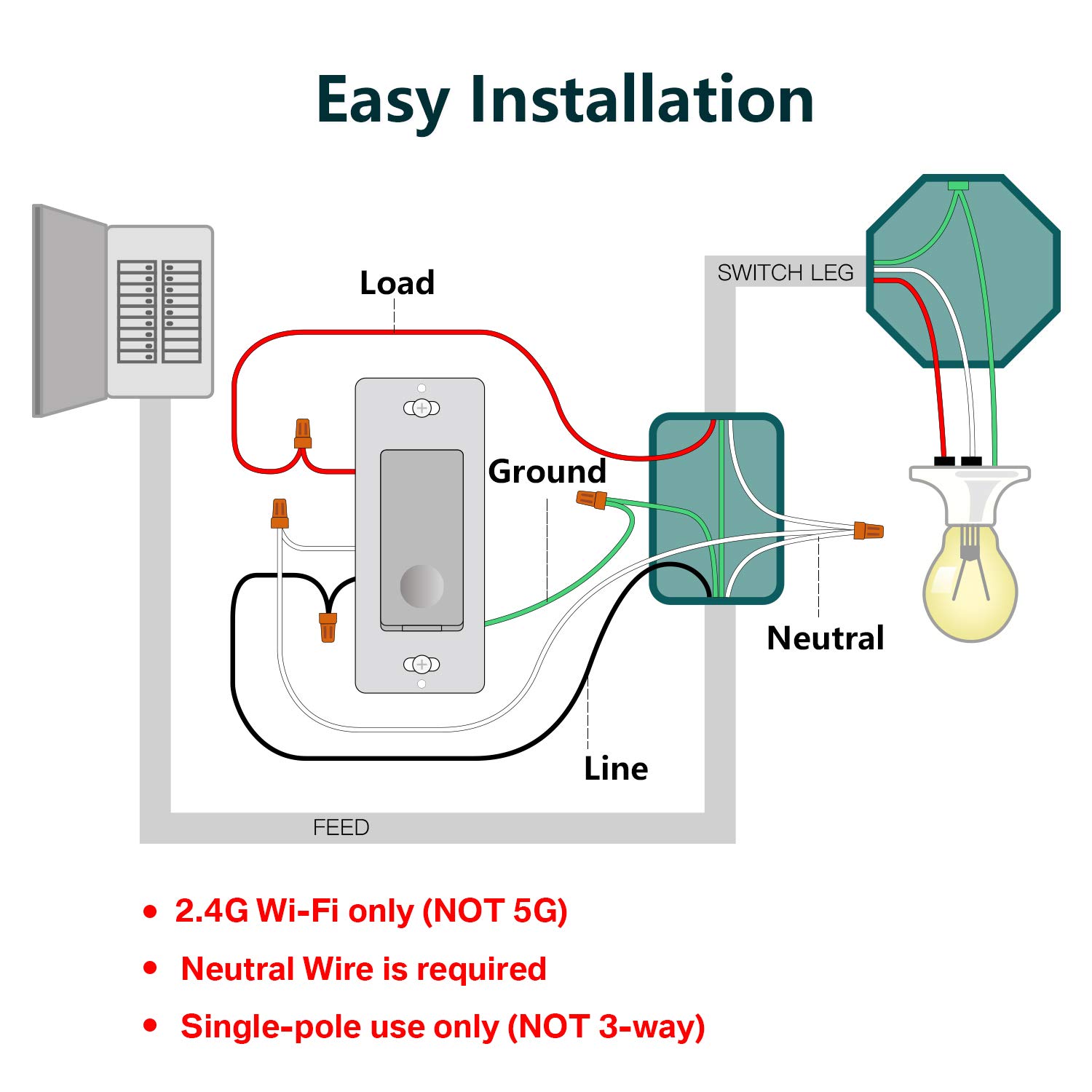 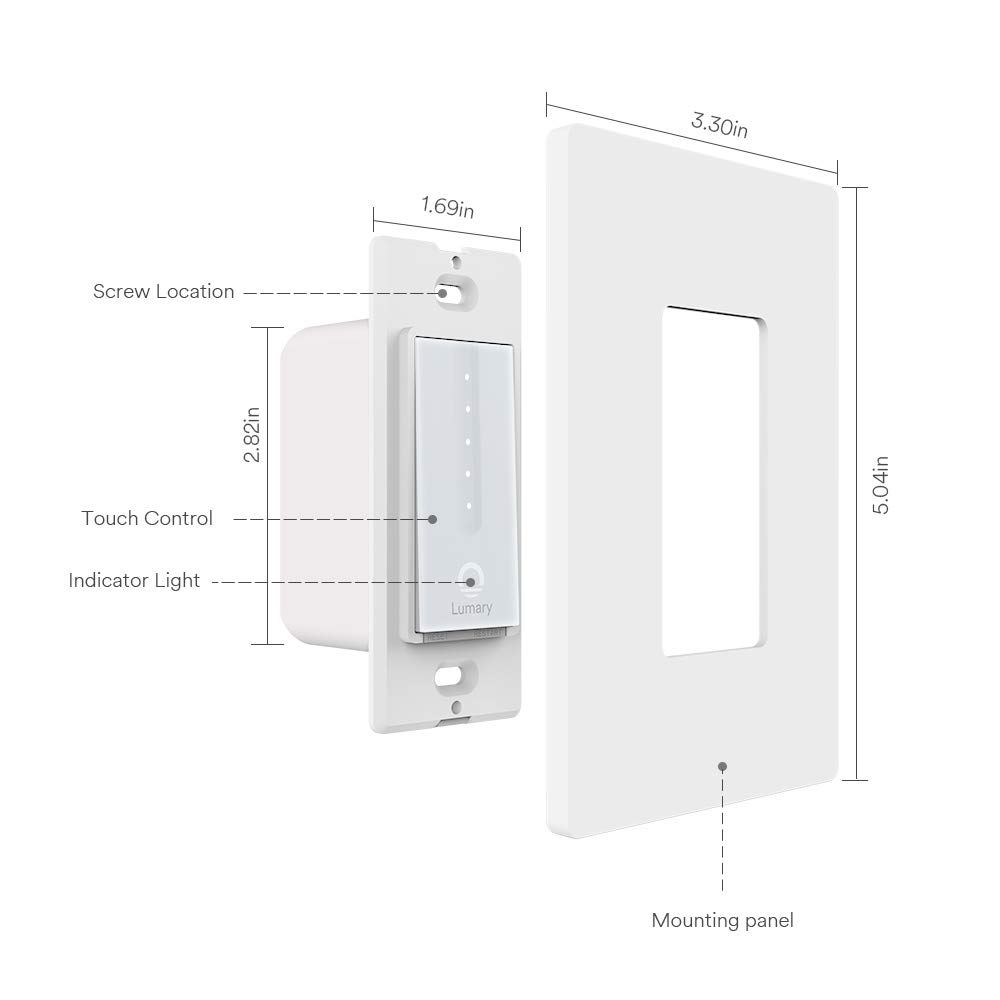 I love this switch and would recommend it to friends and family! I have two of these myself and it adds a great bit of flair of style with the lights and is very attractive. It looks great in my bedroom and the nightlight feature is very nice, but not too bright that it keeps me awake at night. I highly recommend the Lumary L-DS100 Dimmer Smart Light Switch with Wifi and Voice Control, Compatible with Alexa, Google Assistant and would rate it a solid 8/10, only removing some points for its slightly weird touch controls at times. Although it works 90% of the time, it can be a bit frustrating when you're trying to dim the lights and accidentally place your finger too high on the smart dimmer switch and it shoots the brightness up to 100%. Once you get used to how to function it with this minor quirk, then you should be good to go. Beyond that, it's a fantastic switch and I had no trouble setting it up through the "Smart Life" app. Connecting it took a matter of seconds and now I can control it on my phone or with voice with Google or Alexa. If you like what I had to say about this product, please consider checking out the product from my website.